A classic mountain run in the Tararua Ranges

This 24km loop over Mount Jumbo and Mount Holdsworth is one of the most popular routes in the Tararua Ranges, and for good reason. It is very doable as a day trip from Wellington and includes a great variety of terrain and scenery. You’ll experience a beautiful flowing trail along a lush river valley; a technical, steep ascent (or descent, depending which way you decide to tackle the loop); some true alpine ridge-running with spectacular views; and a long, fast, fun descent down the very runnable Gentle Annie track.

Distance: About 24kms.
Elevation: Total elevation gain approximately 1,500m.
Difficulty: This is a true mountain run and should not be underestimated. It is steep and technical in places and exposed on the ridgelines. That said, if you take some basic precautions, allow plenty of time and keep your wits about you, it is an achievable introduction to the mountains.
Estimated time: The fastest runners race around the loop in under 2.5 hours, but the mere mortals among us can expect to take 4-6 hours.  Start out early to make sure you have plenty of daylight.
Be prepared: The Tararuas are known for the inclement weather, and things can change fast. Along the ridgeline navigation can become tricky if the cloud comes in. Check the weather forecast before you leave, and wait for another day if high winds or rain are likely. Always take a topo map and compass (and know how to use it!), warm clothing, a whistle, safety blanket and plenty of water and food in case you get injured or need to sit out a storm. Even on a hot summer’s day it can be cool on the tops. If possible, take a personal locator beacon and/or run with others. Make sure someone knows where you are going and when you expect to be back.

Start and end point: Holdsworth Road End, Wairarapa. Turn off State Highway 2 onto Norfolk Road, 2 km south of Masterton. Follow Norfolk Road for about 15 km. The road end has a DOC campground, toilets and a river to swim in.

Directions: From the car park at Holdsworth Road end, go through the gate and follow the gravel four-wheel drive road. After 100 metres or so you will come to Holdsworth lodge, a small hut with an intentions book in the foyer. After recording your details, continue along the track and cross the bridge to the other side of the river.

Soon you will come to an intersection and you have a choice to make. You can run the loop in either direction. The anti-clockwise direction is the most popular in the race, and is generally considered to be slightly faster. It has a very direct ascent (i.e. extremely steep – we’re talking hands-on-knees hiking territory) and a long, runnable downhill. The clockwise direction is more popular with trampers. It has a longer, mostly runnable ascent and a shorter, steep downhill. Choose your poison. 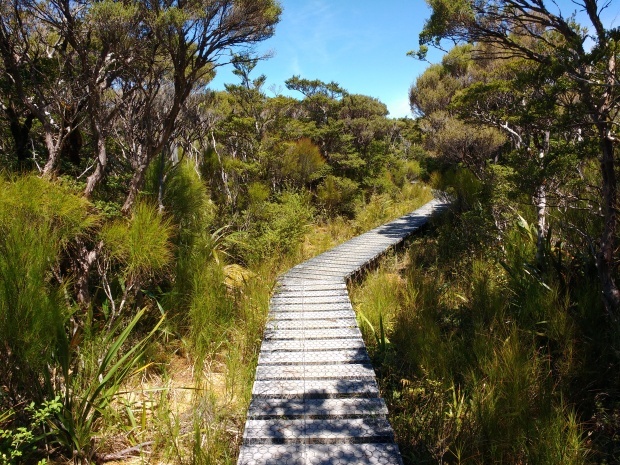 If you want to go clockwise, follow the signs to Powell Hut. This will lead you up a steady climb on the Gentle Annie Track, passing Mountain House shelter along the way. The track gets steeper the higher you get, with some sets of steps and a bit of clambering up rocky terrain as you near the top. You’ll reach Mt Holdsworth – the highest point on the loop – shortly after Powell Hut (where a water stop is recommended), about 10kms into your run. The turn-off to Jumbo Hut is shortly before the summit itself, but it’s worth a quick out-and-back to admire the view.

After summiting Mt Holdsworth, undulate your way along the ridgeline for around 3kms, following the signs to Jumbo Hut. Watch your footing on the steep, technical descent down Rainguage Spur to Atiwhakatu Hut (about 2.5kms), then it’s a gentle, flowing 7.5kms back down the river valley to the road end.

For anti-clockwise runners, follow the signs to Atiwhakatu Hut as you meander your way up the easy Atiwhakatu track for about 7.5kms. Don’t run too fast though – save some energy for the tough grind up from Atiwhakatu Hut to Jumbo Hut. Even the most impressive runners are reduced to walking here, and it’s slow-going. But you’ll be rewarded with expansive views from Jumbo Hut (fill up your water bottles here) and, not too much further up, the ridgeline.

You’ve still got some climbing to do though. You’ll lose and then gain some elevation along the ridgeline, eventually topping out on Mt Holdsworth (if you take the short detour to the summit). Signs will point the way. Then it’s all down hill. Follow the track past Powell Hut and back to the Holdsworth road end on the long and very runnable Gentle Annie track.

Now jump in the river and enjoy a cold beer – you’ve earned it!

From Otari Wilton’s to Johnston Hill for stunning views across to Wellington & beyond
Fabulous sunset views on the entrance to the harbour
What a great morning to enjoy Wellington’s great trail network. From Waimapihi reserve to Brooklyn’s wind turbine & beyond.
Check out our latest story about Trails Wellington & the EPIC work they are doing building trails for #runners & #mountainbiking #runwellington #trailswellington
Have you signed up for our Endurance Training event happening on 31st March at the ASB Sports Centre? Registration link in bio: ☝️Also check out our training plans for @thewuu2k presented by @rere.run on their website. #runwellington @jameskueglercoaching @rere.run #endurance #coaching #trailrunning #trailrunningnz
Skyline walkway on a summer day should be on the cards for everyone who loves a bit of hills on their adventures
Happy Friday 🎉 Do you know where this trig is? Comment below!
Are you training for a running event? Come join our group if you’re aiming to complete or compete over any distance. Our group is made up of experienced runners who can help you get started or get you that elusive PB you’ve been chasing. No matter your ability or distance you are aiming to achieve we will get you there by helping you with a structured & progressive training plan.
How good was your run today?