The Kea Track Club of Wellington

The Kea Track Club had its genesis in October 21, 2015 – almost by accident, you could say. Steve Plowman, who had been coaching runners for 37 years, had all but decided to retire from coaching when he was approached by three runners whose coach had left town and retired. The rest, as the saying goes, is history. We talked to Steve Plowman to get an insiders view of Kea Track Club and what makes it unique.

Can you tell us a bit about the Kea Track Club and its history?

The Kea Track Club (it’s actually a training group rather than an official registered ‘club’ as such) had its genesis in October 21, 2015. It came about as a result of that approach by a trio of runners who told me they didn’t have any organised training sessions available to them and so I offered to provide a Saturday training session to “tide them over” for a month while they found new coaches. Suffice to say, I haven’t managed to retire yet and at times feel as if I have another tiger by the tail in the form of another fast-growing running squad. The first week five runners turned up and attendance has been growing steadily ever since. There are now 80 members on our email list and we regularly gets 30+ members attending the Saturday sessions.

Steve Plowman – giving the Kea group a run down of what’s in store for the Saturday session.

What makes the Kea Track Club different to other running groups?

The group consists of an inter-generational group of runners from absolute beginners to international class athletes who have a love of running as the common ‘glue’ that binds them together. Many clubs run groups that are exclusive to their members but the Kea Track Club is different in that it is open to unregistered runners and registered club runners alike. Obviously we hope to encourage the unregistered runners to join a club (preferably Wellington Harriers – Steve coaches for that club) but everyone is welcome regardless of whether they belong to a club or not or whether they run for fun or competitively. The group consists of runners from six clubs at present – Wellington Harriers and Athletic Club (WHAC), Wellington Scottish, Olympic Harriers, Trentham United Harriers, Victoria University, and Upper Hutt Athletics as well as a range of unregistered runners.

Runners ranging in age from 10 to 82 have run with the Kea group and we’ve had runners from 19 countries join us (New Zealand, South Africa, Italy, France, Switzerland, Australia, England, Ireland, Scotland, Ukraine, Sri Lanka, Hungary, Canada, USA, Germany, Turkey, Peru, the Cook Islands and Ethiopia). Everyone is welcome if they enjoy running and want to meet like-minded souls. It’s a place where everyone is welcome.

Many runners new to Wellington have come along to the group and made great friends as a result. The camaraderie among the members of the Kea Track Club is an important part of that ‘glue’ that binds us together.

We have heard that some really famous runners have come to run with Kea Track Club – can you tell us a bit about these famous runners?

I’m not sure about the “famous” runners you speak of or how that story circulated but we have several very accomplished runners in our midst and they’ve raced some famous runners in their time. Since we started we’ve had members from our group win some of the major NZ races on the running calendar, including provincial championships, NZ Championships, six golds and a silver from seven races at the World Masters Games (including two NZ records) and two of our triathletes have won bronze medals at the World Champs to name but some of their achievements. Once a year we get to see Olympic medalist Nick Willis in action at the same time as us when he returns for a holiday from his US base but Nick isn’t really running with us – mostly away from us. 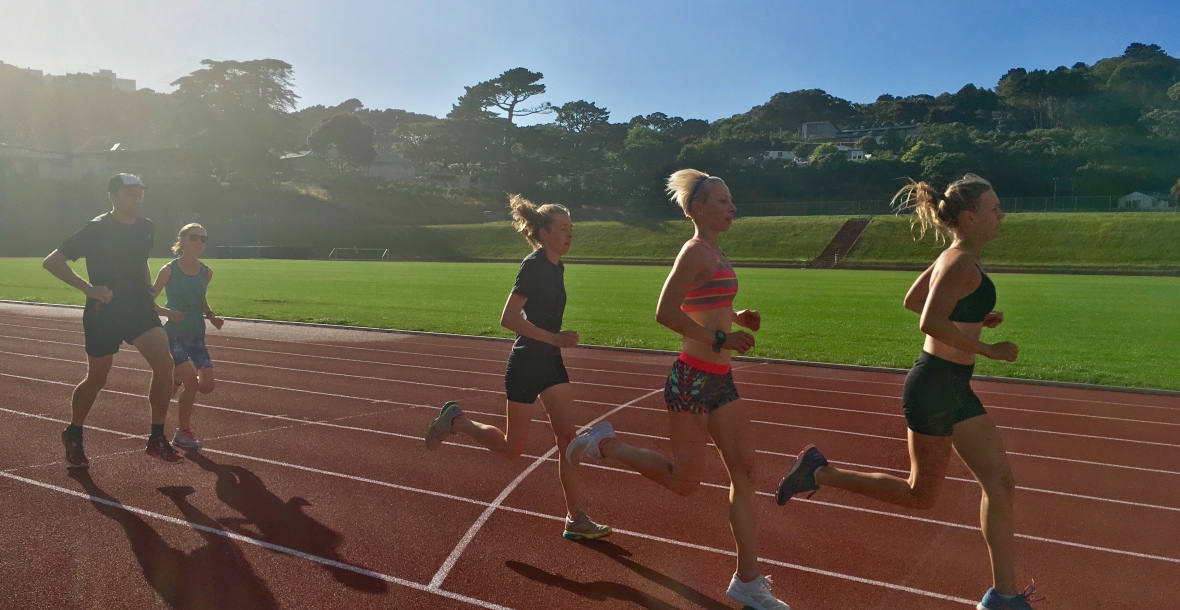 We have heard that Arthur Lydiard has a connection to Kea Track Club is this correct?

Yes this is correct. I learned about coaching from two coaches in particular – my first coach Bob Mitchell (a former NZ mile record holder) was a big influence before he died suddenly and then Bob’s old friend, legendary coach Arthur Lydiard took over as my coach for several years – so that’s where the Lydiard connection comes from for the Kea Track Club.

Who else help to organise the Saturday sessions?

I organise the session and I’m ably-assisted by former NZ champion Gabrielle (Gabby) O’Rourke. Gabby was a top class NZ runner and won many provincial and NZ championships and competed successfully overseas – running in the famed Boston Marathon on eight occasions – at one time running second in the Masters division.

Who can join the Saturday sessions?

Everyone who loves running and wishes to improve their running is welcome. Obviously we hope they will make new friends and maybe even join up with one of Wellington’s running clubs if they wish to compete but that’s not absolutely necessary. If you enjoy running, whether you’re just passing through Wellington, a resident or intending to become one, then the Kea Track Club will make you welcome.

Is there anything you’d like to share about running in general and any advice to novice runners?

My advice to novice runners just starting out is this: Don’t be in any hurry. Too often today we live in a world of “instant this and instant that” and everyone wants results “yesterday”. Rome wasn’t built in a day and neither are good runners. In this sense patience is a form of action. If you work away gradually you’ll improve. If you are in too much of a hurry to reach your goals or you set unrealistic goals compared to your current fitness then you will wind up disappointed and most likely injured along the way too. Running is about consistency – week-upon-week, month-upon-month, year-upon-year. There aren’t any “quick fixes” in running – you have to do the work but you have to do it in a measured, graduated and balanced manner. The balance is crucial in that equation – the balance is between doing enough work and then having sufficient recovery and rest to maximise the benefits of that work – so that you continue building up and not tearing down. There are several “Golden Rules” attached to it which will keep you from being your own worst enemy as a runner.

If you want to learn more about them, then come along to a Kea Track Club session.

Check out our latest story about Trails Wellington & the EPIC work they are doing building trails for #runners & #mountainbiking #runwellington #trailswellington
Have you signed up for our Endurance Training event happening on 31st March at the ASB Sports Centre? Registration link in bio: ☝️Also check out our training plans for @thewuu2k presented by @rere.run on their website. #runwellington @jameskueglercoaching @rere.run #endurance #coaching #trailrunning #trailrunningnz
Skyline walkway on a summer day should be on the cards for everyone who loves a bit of hills on their adventures
Happy Friday 🎉 Do you know where this trig is? Comment below!
Are you training for a running event? Come join our group if you’re aiming to complete or compete over any distance. Our group is made up of experienced runners who can help you get started or get you that elusive PB you’ve been chasing. No matter your ability or distance you are aiming to achieve we will get you there by helping you with a structured & progressive training plan.
How good was your run today?
Excited to announce that training plans for the WAI2K event is now available via our link in bio.
A stunning winter’s day in the coolest little running capital #runwellington
Good day to run up a hill